The US Army and US Marine Corps use a variety of weapon sights and scopes.

We’re going to review the current crop of sights and scopes – and explain what they are used for.

The US armed forces consider optics, sensors and lasers to be combat multipliers. Some of these are available for sale commercially, and some are not.

All of these cannot be exported outside of the US due to government export restrictions.

Here’s the gear we’re going to review in this article. 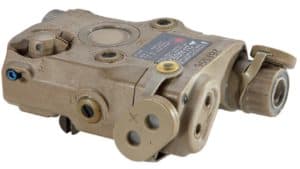 AN/PEQ-15 Standard Power Advanced Target Pointer and Illuminator The AN/PEQ-15 is a multi-function light that includes a visible laser for day use, or an invisible IR laser for use with night vision scopes and goggles. Also includes an IR illuminator.
Click to see price (Optics Planet)

Let’s look at these aiming lasers.

The AN/PEQ-15 is described as a “multi-functional aiming light”, or MFAL for short.

It is also known as the Advanced Target Pointer Illuminator Aiming Light (ATPIAL).

For a civilian, think of this as a “laser pointer”, but for a gun. It’s an laser aiming device.

These devices are designed to provide precision aiming in visible and infrared (IR) spectrums. During the daytime soldiers can employ visible red dot lasers for targeting purposes, whereas at night, they can employ IR beams as they can only be detected with the use of night vision devices.

It is “multi-function” because it includes both a visible laser for daylight use, and an IR (invisible to the un-aided eye) laser for use with night vision devices.

It is normally attached to the M1913 picatinny rail or equivalent, as shown here.

It can be mounted on the side, or on the top of a quad rail.

Because it is an aiming light (laser) it is normally used in conjunction with another optic – as seen in many of these pictures.

The co-aligned lasers are adjustable for windage and elevation.

Not only does the AN/PEQ-15 include two different lasers, but it also includes an IR illuminator.

The IR illuminator provides a wide beam of IR light – sort of like a flashlight.

This can be used to enhance the view through night vision goggles – but is highly visible to anyone (and everyone) else with night vision devices.

The fore-runner of the PEQ-15 was the AN/PEQ-2 and AN/PEQ-4C. The PEQ-15 is lighter and smaller, but both have similar capabilities.

It incorporates an improved IR illuminator to provide better illumination at longer distances, and the cleaner, circular beam allows for accurate range estimation and engagement of moving targets.

Here’s a closeup of the various switches on the DBAL-A2. 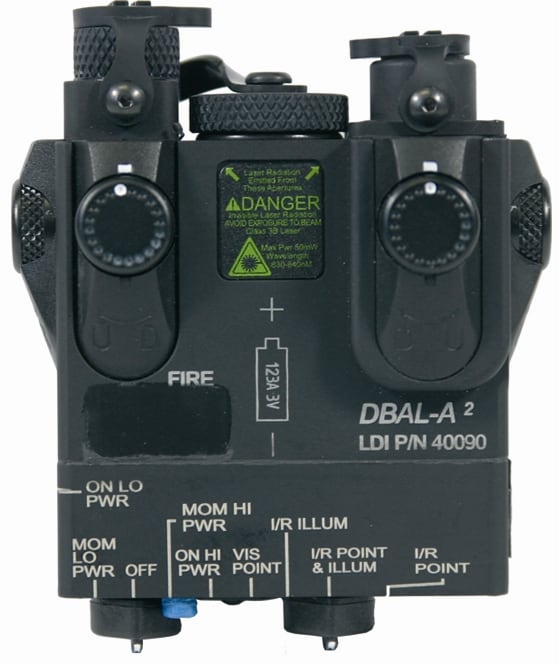 Let’s move on and look at some more.

The AN/PEQ-14 Integrated Laser/White Light Pointer (ILWLP) is a small, lightweight device soldiers can handhold – but it is really meant for use with pistols.

It is the equivalent of the AN/PEQ-15 – but for pistols – and it includes a regular white light/flashlight.

It can be mounted on the M9 pistol with a Military Standard (MIL-STD)-1913 rail adapter (picatinny rail.)

The AN/PEQ-14 combines the functions of a white light flashlight with adjustable focus, visible aiming laser, infrared (IR) aiming laser and IR illuminator into one system.

The AN/PEQ-14 ILWLP is used exclusively by military police units.

Need white (visible) light and laser pointers for a carbine or rifle?

It combines the functionality of a laser rangefinder, the AN/PEQ-15/15A Infrared Aiming Laser and Illuminator, The Multiple Integrated Laser Engagement System (MILES), a digital compass, and a visible pointer into a single system.

The STORM is quite small and can be mounted on weapons both large and small.

The AN/PSQ-23 STORM is an advanced piece of equipment with a lot of features specific to military use.

It is not available for sale commercially.

US Army Aiming Lasers – In Summary

The US Army and US Marine Corps use different weapon sights and lasers for different purposes.

They have a variety of capabilities including visible light, visible laser pointing, and IR (invisible) laser pointing meant for use with Night Vision Devices (NVDs.)

Some are available commercially, while others are not.

Most, if not all, are export restricted per ITAR, but there is no reason you can’t own and use most of these devices as a US citizen on US territory.

The appearance of U.S. Department of Defense (DoD) visual information does not imply or constitute DoD endorsement.

We are an affiliate of OpticsPlanet.com and this article contains affiliate links. If you purchase equipment after clicking through these links, we receive a small commission at no additional cost to you. This helps us to bring you great information about this technology.

There’s more than one way to see in the dark. In this article, we’re going to take a close look at a thermal weapon sight used by the U.S. Army, Marine Corps, and others. The AN/PAS-13 is a Thermal Weapon Sight used in the US military. It enables night vision capabilities, although thermal sights are useful in the daytime too. [READ MORE…]

In this article we’re going to take a close look at the AN/PVS-30 Clip-on Sniper Night Sight (COSNS) as used by the U.S. Army and other armed forces. A Night Vision Scope let’s you see in the dark – and in particular accurately aim a weapon in the darkness. Here’s the gear we’re going to review: These types of sights [READ MORE…]

In this article we’ll take a close look at Dual Beam Aiming Lasers (DBAL), such as those from Steiner Defense. First of all – what is a Dual Beam Aiming Laser? It’s a laser pointing device that contains both a day-light visible red or green laser combined with a co-aligned Infrared (IR) laser that is visible only with night vision. [READ MORE…]